Aviation Accident Investigation Methodology
To practice aviation law, a lawyer must understand the principles of airplane and helicopter crash investigation. For over forty years, our lawyers have participated in the investigation of airplane and helicopter crashes. This includes participating at wreckage and laboratory inspections, coordinating, and overseeing flight testing, and ensuring that each case is staffed with experienced and trained investigators and scientists of the appropriate disciplines. We have successfully presented our accident reconstructions to judges and juries across the country. 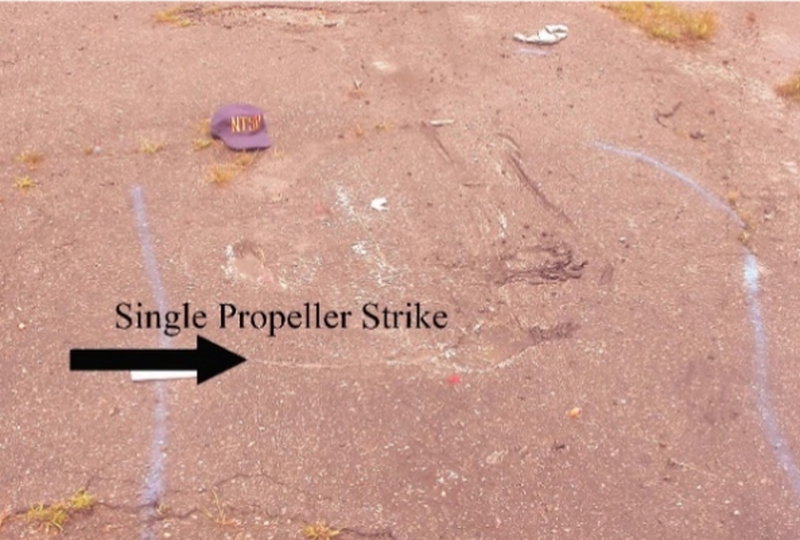 The accident investigation begins at the accident scene. However, our country’s government regulations prohibit accident victims from having any involvement in the NTSB’s on-scene investigation. Instead, the National Transportation Safety Board only permits manufacturers and potential defendants, to participate in the on-scene investigation. Accident victims do, however, have access to the initial accident scene photographs. These photographs reveal much to the trained investigator. They can reveal angle of impact, whether an engine was producing power, and whether an aircraft was structurally intact before the crash. For example, in the picture above, a single engine Cessna impacted the ground at a relatively low angle leaving only one propeller blade gouge at the point of impact. This is an indication that the engine was not producing significant power at the time of impact. 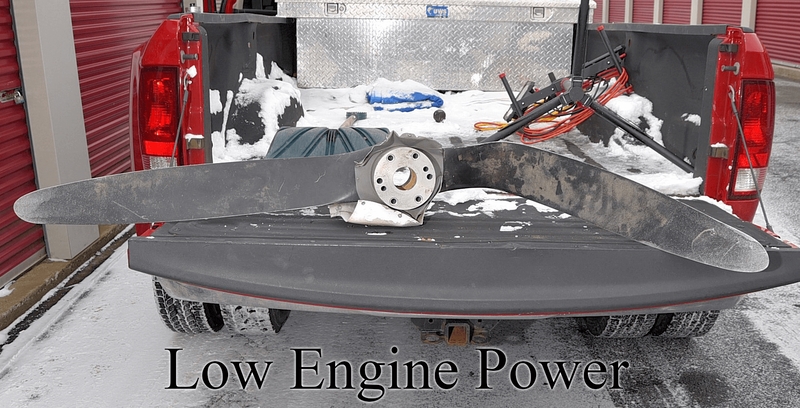 Like the on-scene investigation, the NTSB invites only the manufacturers to inspect the engine and airframe components. Again, the NTSB gives these potential defendants the opportunity to deflect attention away from their products as a cause of a crash. After the NTSB “releases” the wreckage, our investigators perform a more detailed, objective, and thorough investigation. To prepare our clients’ cases, we coordinate inspections, teardowns, and when appropriate, testing, of an engine involved in a crash. The condition of the propeller can reveal whether the engine was producing power at the time of an impact. For example, in the case of an impact with little to no engine power, the propeller is usually straight. On the other hand, when an aircraft impacts the ground with high engine power, the propeller can be damaged much differently due to torsional forces. A trained investigator can tell the difference. 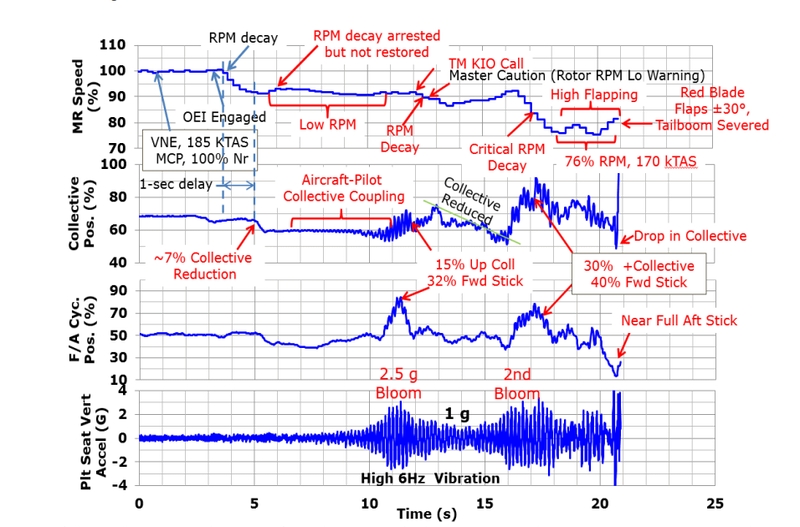 Many aircraft today are equipped with data recording devices. These features assist accident investigation and can prove what occurred in the final moments before a crash. Data acquisition and analysis is becoming more and more important in modern accident investigations. We are experienced in the various types of acquisition devices and how to incorporate data in our client’s cases. We also associate with experts who are leaders in their fields who are skilled in data evaluation. 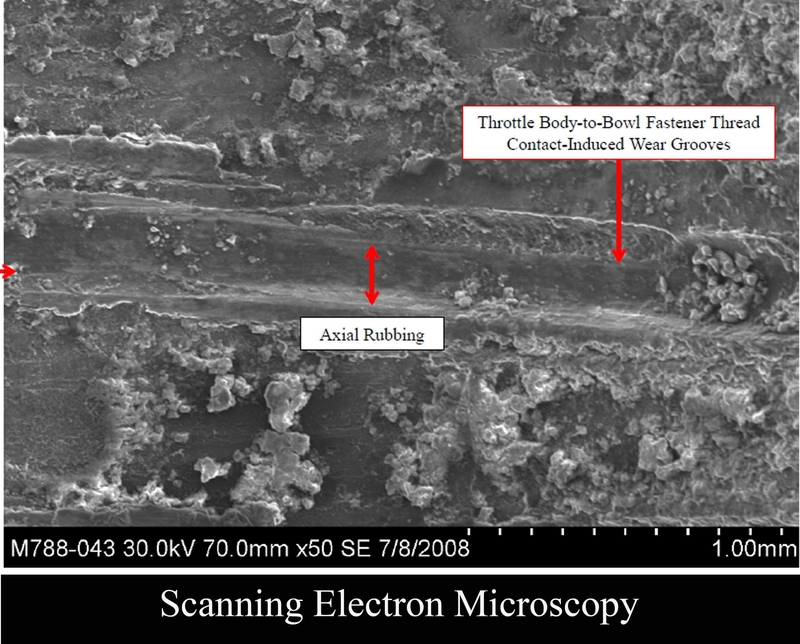 We spare no expense in the evaluation of aircraft and engine components. We work with laboratories across the country equipped to use forensic tools such as scanning electron microscopes, Fourier-transform infrared spectroscopy, Energy Dispersive X-Ray Spectroscopy, precision measuring devices, and CT Scanning. These forensic investigative techniques are necessary to evaluate the nature of fractures, metal to metal rubbing, identification of materials, and to quantify measurements. Each case is unique and so too its investigation. We pride ourselves on using state of the art equipment and respected experts in their respective field to prepare a client’s case. 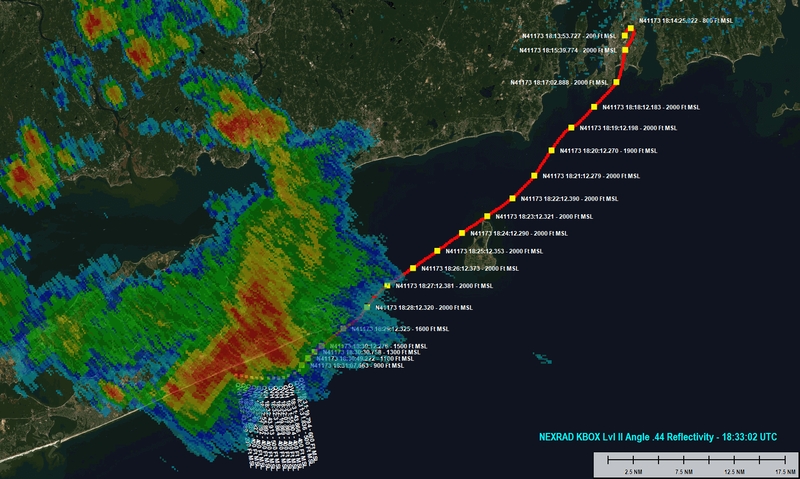 The work does not end in the laboratory. Depending on the requirements of a case, experts trained in assessing aircraft structures, aerodynamics, radar analysis, occupant protection, fire origin, weather, and human factors, are consulted to provide a full picture on the cause of a crash. Given the complexities of aircraft crashes, it is often necessary to rule out all other potential causes. In appropriate situations, engine testing or flight testing may be required. Once the full forensic evaluation is performed, witnesses are interviewed or deposed, aircraft performance capabilities evaluated, and the expert analysis completed, rendering a reliable understanding of how an aircraft crash occurred. 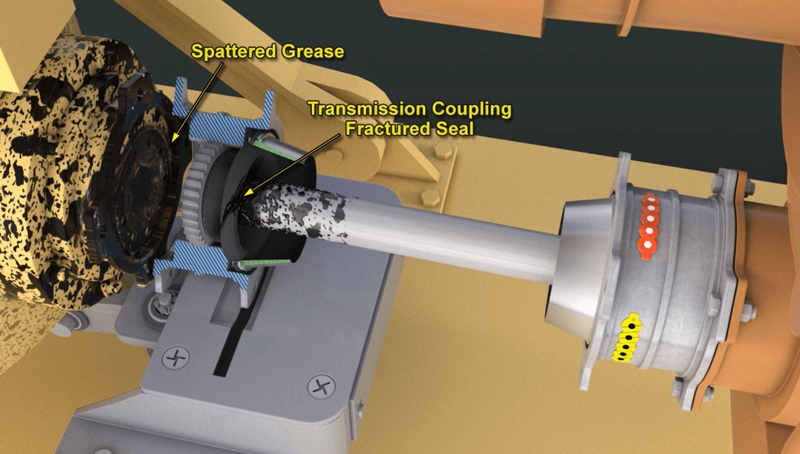 Visual representations are extremely helpful in assisting jurors to understand the technology and appreciate the depth of analysis. Katzman, Lampert & Stoll regularly engages animators to render complex flight paths and mechanical principles in formats easily comprehensible for judges and jurors. 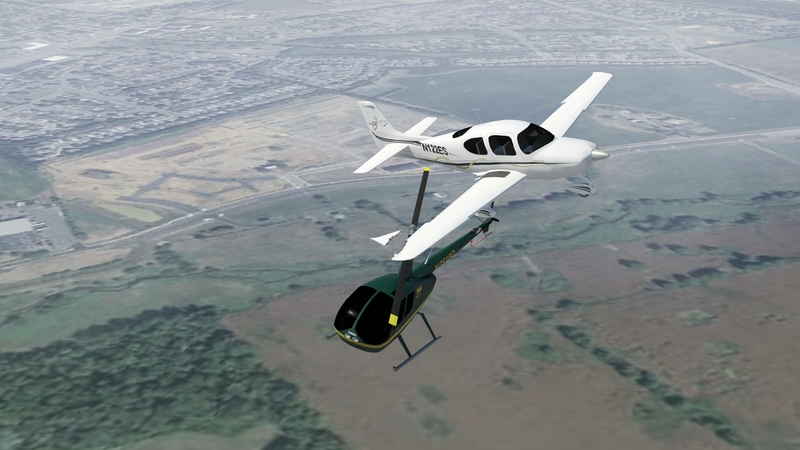 An aviation lawyer must bring science to the courtroom, and must understand the science and teach it to a jury. This is what Katzman, Lampert & Stoll does for our clients. Every case is unique, but the scientific and legal principles which apply are a constant.

Aviation Litigation Methodology
Aviation product liability lawsuits are expensive and time-consuming. Anyone hiring a law firm to handle an aviation case must get reliable answers to the following questions: Is my lawyer capable of trying an aviation case to a jury? Will my lawyer understand the complex legal issues my case may implicate? Does my lawyer have the resources to properly prepare my case?

Courts in the United States are divided at the state and federal lines. In aviation cases, federal courts may hear cases involving federal questions, treaties, and disputes between citizens of different states. State courts are generally competent to hear any aviation case. However, not every state or federal court can hear any case Whether the case will be in federal, or state court is a paramount consideration that has to be carefully analyzed before commencing an aviation lawsuit.

It is important that any firm handling an aviation case understand the types of documents manufacturers prepare, how to ask for them, and importantly, how to fight for them. For over forty years we have been preparing aviation cases, litigating discovery issues, and taking testimony of adverse witnesses. At trial, it is often necessary for a jury to see the full picture of the history of a product. Moreover, it is necessary for the retained experts to prepare and present their opinions carefully and fully under the direction of the trial attorneys.

Aviation cases are expert-witness driven. We work with expert witnesses who are nationally renowned and leaders in their fields. We have extensive experience asserting and, where necessary, defending the integrity of the experts’ accident reconstructions that we present in court. In just about every aviation case, there is a time when a defendant challenges a plaintiff’s experts’ accident reconstruction, seeking to strike the experts’ opinions under the rules of evidence. These defense challenges are often false and misleading, but we treat them all with the utmost seriousness. We have litigated expert witnesses’ challenge hearings spanning several days. The experts we work with know that we are competent to defend their work and navigate the complex legal issues involved in an expert’s challenge. Because of our knowledge in this area, leading experts are willing to associate with our firm.

We use state of the art technology to teach juries how an aircraft crash occurred. We use the results of the discovery we obtained from the defendants and other third parties to establish liability. Our experts’ presentations are clear and concise. Our experience in the courtroom and success with jury trials anchors our commitment to our client’s cause.