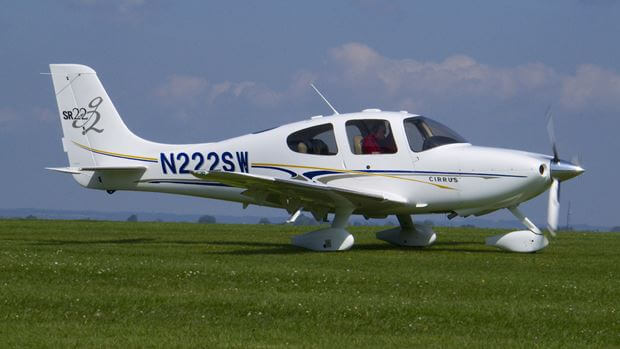 On Wednesday, February 29, 2012, a CIRRUS DESIGN CORP SR22, federally registered as N544SR, crashed near Melbourne, Florida, while maneuvering for landing. The private pilot and two passengers were fatally injured.

The NTSB examined the wreckage at the accident site and reported that all major components were at the scene; an odor of fuel was present at the site; the engine compartment, firewall, instrument panel, cockpit, and cabin areas were all destroyed by impact; the empennage and tail section remained largely intact; control cable continuity was established from the flight control surfaces in the tail to the cockpit area; control cable continuity could not be established to the control surfaces in the wings due to multiple cable breaks; all cable breaks displayed signatures consistent with overload failure; the three-bladed propeller was buried in the crater and separated from the engine with one blade separated and two blades in the hub; and, all three blades displayed similar aft bending, leading edge gouging, polishing, and chordwise scratching. The Cirrus’s Airframe Parachute System (CAPS) was deployed and tangled in the wreckage. An Avidyne Primary Flight Display (PFD) and Multifunction Flight Display (MFD) along with the airplane’s Electronic Ground Proximity Warning System (EGPWS) were recovered from the wreckage and forwarded to the NTSB Recorders Laboratory in Washington, DC.

This accident has the classic signature of an accelerated aerodynamic stall occurring at low altitude. It will be surprising if the NTSB includes any other factors in its finding of probable cause. But there are other factors to consider, including the slick wing and aggressive aerodynamic stall characteristics of the Cirrus SR22 airplane and the air traffic controller having instructed the pilot to, “cut it in tight” when the airplane was on a tight base leg. Like the Cirrus SR20, the Cirrus SR22 is a composite airplane that incorporates a thin, aerodynamically slick composite wing. The Cirrus airplanes have a history of landing related accidents and an unusually high accident rate. There may be a legitimate question of whether the handling qualities and characteristics of the Cirrus SR22 (particularly in aerodynamic stall) comport with the FAA requirement that the airplane can be flown by a person possessing average piloting technique and skill. Coupling the stall characteristics of the Cirrus SR22 with a directive from the air traffic controller to execute a “tight” flight maneuver (“cut it in tight”) while the airplane was at low airspeed and low to the ground, created a recipe for disaster.